From Books Around The Table, Dino-Score! 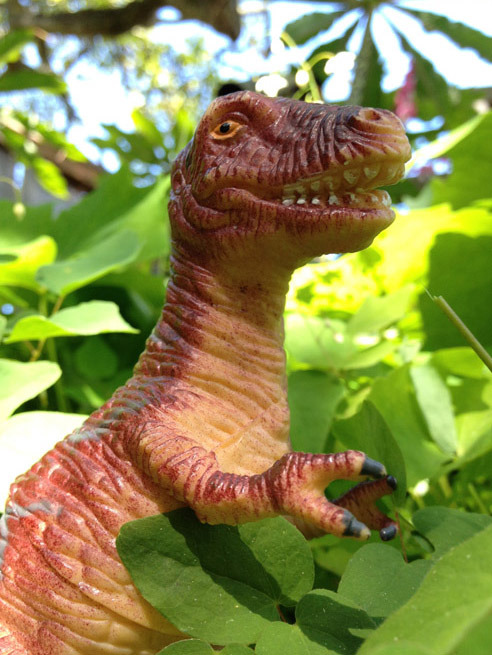 This next installment in my dinosaur chronicles is about Fate. Life is full of struggles and disappointments, but sometimes you can’t help but feel the stars are smiling at you.

When I was asked by an editor at Scholastic to illustrate Marion Dane Bauer’s manuscript, Dinosaur Thunder, there were many reasons why the prospect was appealing to me.

First and foremost, I crave the opportunity to work with  texts as well-crafted as Marion’s. I had the pleasure of meeting Marion at the Vermont College writers program in the Winter of 2009 when I rode there on the coattails of Laura Kvasnosky. Marion is a sensitive, thoughtful, beautiful writer and she impressed me with her insight and generosity as a teacher and mentor.

I am also a die-hard dinosaur devotee. I have been fascinated with Saurischia since I can remember. Of course I had a set of plastic dinosaurs when I was young (didn’t everyone?), but my devotion to them didn’t end when I was too old to play in the sandbox. The decorations on my dorm room wall my Freshman year in college included dinosaur theme-park postcards and a certified dinosaur-hunting license (from one of said theme parks), right next to my poster of a Degas ballerina. Even today, there is a glow-in-the-dark dinosaur skeleton in my closet. I’m serious. That’s not a skeleton-in-the-closet joke, although it probably should be.

Not surprisingly, I accepted the job. But there is one thing to consider when taking on the task of illustrating a book with dinosaurs in it. If you are illustrating a book that includes animals – say, dogs or cats or mice or armadillos – finding photo reference is pretty easy. Not so, dinos.

In spite of what you may think if you’ve seen Jurassic Park, no photos exist of real dinosaurs. There are lots of illustrations of dinosaurs, but no right-minded illustrator wants to illustrate from another illustrator’s work. It just isn’t Kosher.

I had a few toy dinosaurs sitting around already (see confession above) but not enough variety to work from. I decided I was going to have to invest in another toy dinosaur set. I braced myself for an Megasaurus-sized shopping spree. The good ones are expensive!

Enter a dinosaurus ex machina: Near my house, there is a collection box for a thrift store chain (not a non-profit). This box sits on the edge of the parking lot at my neighborhood grocery store, which I go to at least once or twice a week, and often donations are left on the ground around the box if it’s already full.

On this particular day, as I was lugging my groceries home, I glanced at the pile of stuff sitting on the ground next to the box and – I kid you not – there was a Tyrannosaurus rex head sticking out of the top of a plastic garbage bag. I stopped. I looked around. I crouched down to look further into the bag, and it was full of toys, most of which were dinosaurs. I think the clouds parted and the sun shone down, but I’m not sure if I remember that part correctly.

While stuffing dinosaurs into my grocery bags, my purse, my pockets, I considered the guilt I was incurring by taking things from a donation station, but I promised myself I would re-donate them some day, to a not-for-profit organization, and I prayed that none of my neighbors could see me…

When I got back home I unloaded my loot and surveyed what I’d scampered off with. There were over forty dinosaurs, all sorts. I no longer had to worry about finding dinosaur reference for the book. 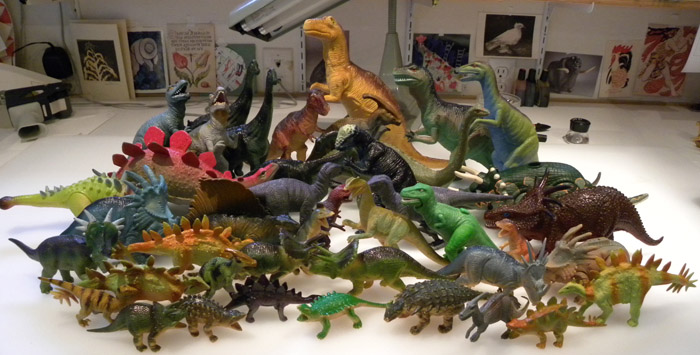 Aren’t they a grand collection?

They were extremely helpful to have when I was working on the book. Like I said, sometimes you feel like the stars are smiling at you, and dinosaurs are your Destiny. 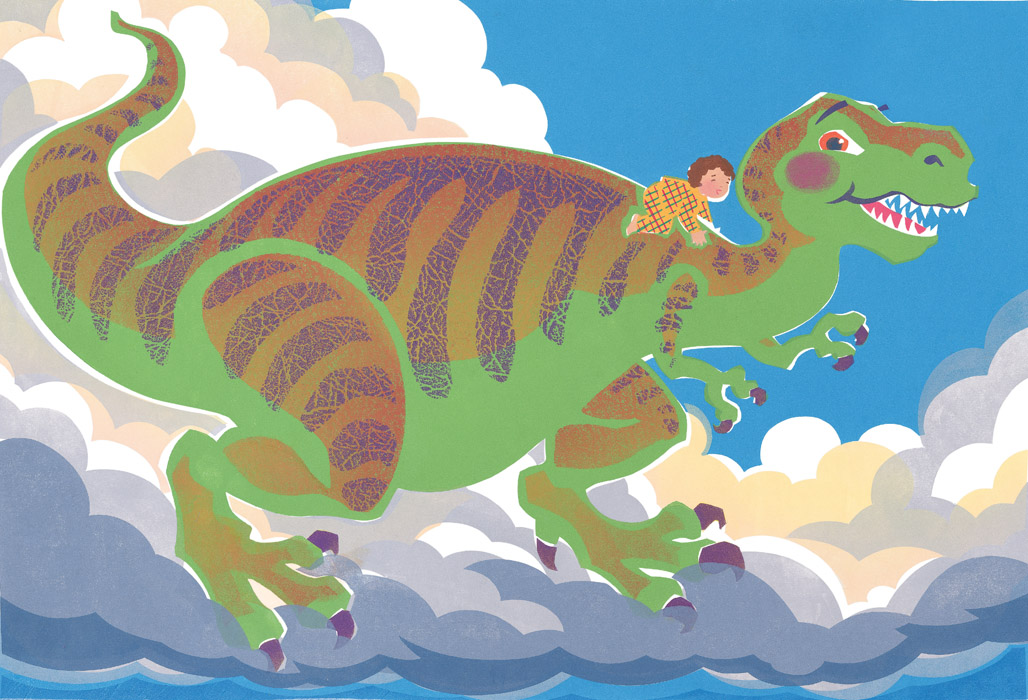 And I am going to re-donate those dinosaurs. Any day now…